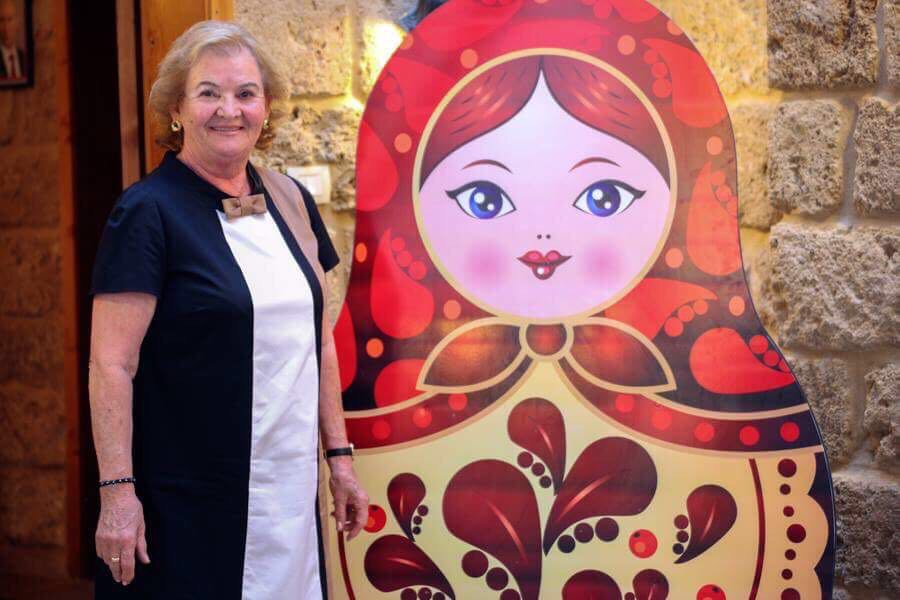 During ups and downs, for richer or for poorer, one thing remains as solid as rock: her love for Lebanon, despite the many different phases the country has been though. She is tough, and dedicated. This is her story.

It was a perfect love story that blossomed

I met my husband while we were both studying in Moscow at the Patrice Lumumba Faculty of Medicine. My husband, Dr. Simon Sakr, was Lebanese. A very smart and cultivated man. We got married in 1966, the same year I visited Lebanon for the first time. 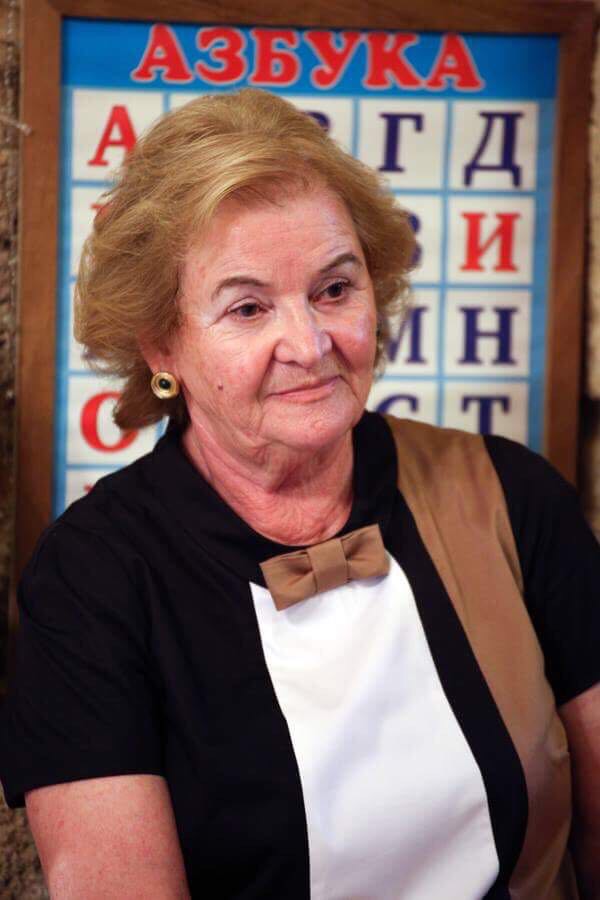 In 1971, I moved to Lebanon permanently. I came with my husband and our first-born. It was difficult to stay in Russia so we came here and opened our clinic in Sed Al-Bauchrieh where we worked together, him as a gastroenterologist, me as a defectologist and a psychopathologist.

I was among the first soviet generation to come live permanently in Lebanon. My father was a soviet hero. And it was difficult for us to get a pass to come live here. But love always triumphs over everything. We managed to come to Lebanon to establish ourselves. Together, we made a living and a career. We had four children and eight grandchildren. And long after he passed away, I still carry on his legacy. When you love someone, there are no borders, and no countries. For home is always a person.

And then there was war…

I arrived to Lebanon during its golden century. It was wonderful! Unfortunately, a few years later, the war started. But I learned strength from my Lebanese friends. The women here are strong. I learned how to survive with nothing. I learned how to cope and to manage. There was always a plan B for everything. For example, when there was no electricity, we had candles. Nothing stopped me. I never felt afraid, maybe because I loved my husband so profoundly and I wanted to be where he was. Even under the heavy shelling, my children never skipped a day of school. I worked with the Lebanese Red Cross. I even gave workshops to the military on how to treat the wounded. I loved Lebanon like parents love their baby. It was my little baby and it needed help. We didn’t stay in Sed Al-Bauchrieh though. We built a summer house in Bentael. But instead of spending just our summers there, we decided to spend our whole life. War came, war went, and we survived.

Just like in Russia, women here are the neck!

I see many similarities between Lebanese and Russians. Mainly, the generosity of both people. When you are invited at a lunch or a dinner here, Lebanese end up cooking all sorts of dishes. They welcome you at home with open arms. Family ties are strong. In Lebanon, just like in Russia, people respect their families and their mothers. While a man is, in both countries, the head of every family, the woman is the neck, she turns the head wherever she wants! Women here are strong and very clean. I think the Lebanese are the only people who know how to serve the foreigners best. Lebanon has some sort of magnetism which attracts people from all over the world.

The mountains of Lebanon remind me of Russia

I love Bentael, I love northern Lebanon, all these magnificent mountains. I particularly admire the region of Ehden, it reminds me of Russia with its perfect climate in summer, dry with a fresh breeze. I also love the sea in Lebanon, I like to swim. Around the month of April, almost every year, you can swim in the sea and ski on the mountains during the same day, because the mountains are very close to the shore.

It was under the auspices of the Russian Imperial Society, founded by the Tsar, that Russia began to help Syria, Lebanon, and Palestine by building churches, hospitals, schools, and universities. Saint George Hospital in Beirut ranks among the oldest hospitals in Lebanon and, together with its affiliated University of Balamand, northern Lebanon, they incarnate the Russian Orthodox heritage.

Birds of feather flock together…

Just as the similarities between Russians and Lebanese do not cease to amaze me, our natures interact as well. In fact, my husband founded the Natural Reserve of Bentael (www.bentaelreserve.org) which highlights the importance of ecosystems and organizes ecotourism tours. Then I worked on developing the reserve and on twinning it with two Russian reserves: the reserve of Dagestan, from which around 700.000 birds migrate every year to Africa or the Middle East. We are now studying the types of these birds that fly over Lebanon or stay in Lebanon. The second one is the Reserve of Ytrish, by the black sea. It preserves almost the same fauna and flora of Lebanon, they even have Cedar trees there. We are doing great work and advanced studies in that area. 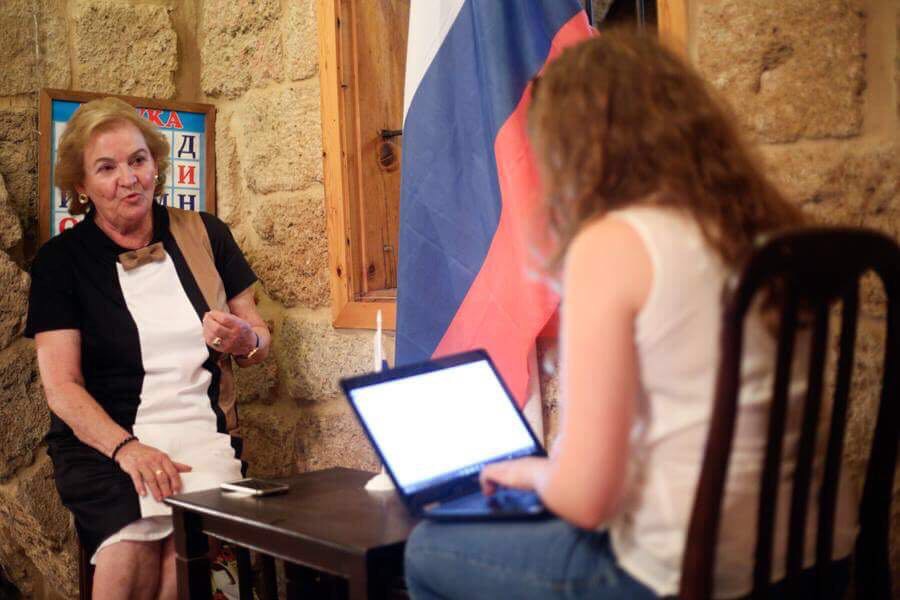 I am also the co-president of the Lebanese-Russian House in the Diaspora house in Batroun. We organize several activities for the Russian diaspora (about 40.000 persons) in Lebanon.

The “Golden Egg” and a message to Russian tourists

Tourism is a golden egg, especially in Lebanon. Unfortunately, the media everywhere lacks content on Lebanon. This country is old, historical, it could be a great attraction for Russian tourists who are very smart, who love architecture, paintings, history, and outdoor sports activities. They can find their passion awaiting here. They can also enjoy the weather. Lebanon is the oriental Switzerland, it has an important culture. It is not to be missed. There is something for everyone here and each region has its unique charm, especially in the northern part of the country. We are also glad to receive Russian tourists within the project of “MyLebanon”. We have already met Maria Ivanova[1] and we know how dedicated she and her team are. Together, we will cooperate and organize festivals and exhibitions that are interesting for the Russian diaspora and Russian tourists.

I still find it very difficult because of the difference between the formal, written language and the spoken Lebanese dialect. I do understand it. But I learned French here in Kaslik and I find it easier to communicate with people in French